Bitch is the sequel to the dance performance BITCHCRAFT and is based on the practices we call bitchcrafting. Bitchcrafting is a form of activism that generates meeting places in the shape of performances and workshops. We see the theater as a place for rituals and we want to embody how women have exercised the social and cultural power they were otherwise denied through magic.

The bitch is an instigator, a fire-starter, a feisty and easily provoked character who is liable to attack first and ask questions later. She sees herself as trying to help, rescuing the world from its madness by imposing her sense of magic upon it. She has enormous energy and unleashes her fire when interfering with dark forces. The bitches power is strong but not hostile, she is loud and has a voice that can cut through mountains. She loves to shake all her body parts and has a tendency towards overkill. The bitch practices bitchcrafting with her pack that she has an unbreakable bond with. Bitchcrafting is a human battery that generates sisterhood, caring and fearless togetherness.

Bitch is a one- on - one solo performance that invites the audience member on a journey through a world of distorted images, sound and movement. The Bitch works through rituals of healing and resistance, a resistance to the ongoing practise of controlling the female body. Bitch wants to blur the boundaries between the audience and the stage. A performance that simultaneously undresses and dresses up- exploring the power of the gaze between the performer and an audience. 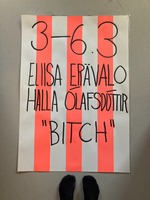